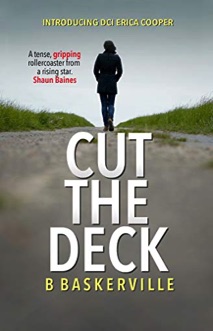 "A tense, gripping rollercoaster from a rising star."

Pick a card. Any card. This killer wants the whole deck.

When the body of a teenage girl, dressed in a magician’s outfit, is discovered on a beach in North Tyneside, DCI Cooper fears she is dealing with a different breed of killer. Some murderers leave a calling card, but this girl’s killer stitched his card into her flesh.

Cooper quickly gets to work and identifies the victim as missing fifteen-year-old, Rachel Pearson. As the investigation progresses, Cooper soon discovers that Rachel’s father has a short fuse and that her boyfriend, Will, has a possessive streak. Before she can track down Will, another girl is murdered.

With a serial killer stalking the teenagers of Tynemouth, Cooper’s boss and the press are demanding results. As Cooper’s self-confidence dwindles she works to find the connection. The eyes of the country are on Tynemouth and her investigation. Can Cooper put her personal issues behind her and stop the man tormenting her hometown before another mother loses her child and she loses her job?

An abduction. An assault. Two terrible cases and time is running out.

Macey trusted the good Samaritan. She shouldn't have.

Omar didn't fight back. He should have.

When nineteen-year-old Macey Gallagher goes missing after a night out in Newcastle upon Tyne, DCI Cooper feels as if she is the only one worried about her. During her investigation she unearths a disturbing pattern. Macey isn't the only young woman to go missing in the city. Then a horrifying assault lands on Cooper's desk.

As Omar Ali slipped into a coma he only had the strength to utter two words to Cooper:

A hate crime with horrific injuries and little evidence to go on.  Who was the bad dog and why did they target Omar? Cooper must work quickly. She doesn't know who the attacker is, but he knows her. And he is watching.

When crime boss, Fletcher Blackburn, is gunned down in his own home, DCI Erica Cooper’s blood runs cold. The Blackburns aren’t the sort to wait for the courts to hand out justice, and with fingers being pointed at a business partner and a rival gang, it isn’t long before the violence escalates.

To prevent a gang war, Cooper must solve this case as quickly as possible. She knows the key to the case lies with those closest to Fletcher, but the Blackburns don’t trust the police.

A trophy wife, a brother in prison, a merciless son, a spoiled princess, a bookish accountant, and a power hungry nephew. One of them knows the truth. None of them will open up.

DS Jack ‘Tennessee’ Daniel thinks most murders are rooted in sex and money but forensic pathologist, Margot Swanson, thinks there’s more to this murder than first appears. Still traumatised from the events of last spring, Cooper must keep one eye on the crime families of the north, and one eye on her own. Can she get to the bottom of this before all of Newcastle is burned to the ground?

An unputdownable thriller set in the stunning Northumbrian countryside.

While DCI Cooper rushes to be with her grieving family, the body of a jazz singer is found buried in a giant sandcastle. DS Jack ’Tennessee’ Daniel is asked to take on the investigation in Cooper’s absence. Delving into the deceased woman’s life, but with no friends or family to speak of the woman is a mystery.

Then another beach, another sandcastle, another murder. With seemingly nothing to connect the victims and a suspect field of thousands, Tennessee has to overcome his insecurities, lead the team at CID, and stop the Sandcastle Killings before anyone else is hurt.

When Cooper returns, she is horrified to discover the depraved details of the case. Concerns about her health, her father’s business, and her daughter’s happiness must be put aside because with this killer…

All bets are off.

Set in the stunning north-east of England, this addictive thriller will keep you guessing until the shocking finale.

Northern Roulette is the fourth novel in the DCI Cooper series from Newcastle-born author B Baskerville. Great for fans of LJ Ross, AM Peacock and Howard Linskey.