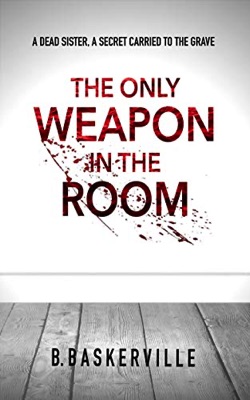 THE ONLY WEAPON IN THE ROOM

Someone is following her.

Someone is selling trade secrets to a rival.

Someone from her past won't leave her alone.

Athena Fox works as a professional fighter in the north of England.  It’s not your usual 9-5, and on tough days she’s happy if she can walk home unaided.

When Athena’s sister, Molly, takes her own life a year after their mother’s death, Athena suspects grief isn’t the real reason. Especially when she finds Molly’s diary and discovers a list of men in the back cover.

Paranoia takes hold as one by one Athena traces the men and soon finds herself on a twisted path of violence and self-doubt. With a title fight to prepare for, Athena should be concentrating on her training, but she cannot help herself. She must know the truth about Molly, even if the answers she finds bring her no peace at all.